Arctic Frontiers: Offshore wind in the Arctic - a part of the mixed solutions

Northern-Norway at the forefront in the energy transition

Nothern-Norway has  the potential of being the leading region globally in energy transition, and creating new green industries with complete value chains. In order to be successfull with this ambition the need for reneawble power is essential. A study done by Sintef Energi on behalf of Energi i Nord indicates that the surplus of power we have today, will be gone by 2030. Offshore wind can play a vital part in maintaining a long-term power surplus, to grow new green industries.

Together with Norce, UIT - The Arctic university and Equinor we plan a researched based project to identify potenital areas in the Arctic for offshore wind, taking into consideration both wind resource data, as well as coexistence with other industries and peoples opinion on offshore wind. By addressing this in a broad perspective, and with a reschearched based approach we can help esablishing a new green offshore industry in Northern-Norway, which will be vital in the land-based value chains.

The Norwegian Government presented back in May an ambitious offshore wind initiative. The aim is to use offshore wind power to generate new elctricity on a par with the total amount of electricity currently produced in Norway.

As of today there are now areas in Northern-Norway which are open for offshore wind, meaning that all companies with suppliers are looking towards the North sea. By not focusing on areas in the Arctic, we will again be "left behind" when it comes to developing a new offshore industry and its value chain, along side the fact that land-based industries will need to look elsewhere for stable power supplies.

Arrangementet foregår på engelsk. The event will be held in English. 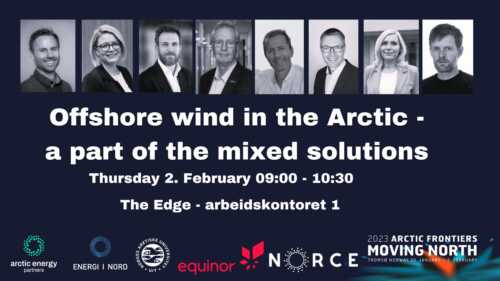